We use cookies to collect information about how you use www.elavon.ie . We use this information to make the website work as well as possible and improve our services..

The site you requested may not be relevant in your area.

Payment preferences in the age of social distancing

Payment preferences in the age of social distancing
You are here:
27 August 2020

We explored, in an online survey with Ipsos Mori, the spending habits and plans of 1,000 adults in Ireland.

Here, we take a deeper dive into what respondents told us about their payment type preferences – broken down by age, income bracket and geographical spread. For the full study overview, see our summary.

Does age have a bearing?

Those most likely to pay with cash are aged 55-65 (17%), although they’re still around three times more likely to pay using the digital methods of card or contactless (52%).

Is that a surprise?

Not really. But interestingly, this age group was also the least enthusiastic to pay with card or contactless payments (48%) although, as an option, this was still four times more popular with them than paying with coins or notes.

“Before this research, we might have predicted younger age groups would be keener to use digital payments than older age groups, but this is not the picture emerging in Ireland,” says Simon Tune, Commercial Director for Elavon Europe. “However, while the strength of willingness may vary, our research shows the use of card or contactless payments is the strongest preference overall across all age groups.”

Is what you earn relevant to how you pay?

As with age, paying by card and contactless methods was by far the most popular preference, irrespective of income.

Those earning €100,000 or more were the most likely of all income brackets to use cash or cards and contactless payments equally (37%).

Cash, as an option, was most popular with the lowest income group. More than one in five of those earning under €20,000 said it was their preferred way to pay (21%).

“Whatever the reason for cash’s popularity among this income bracket, it shows that after the coronavirus pandemic is over, there may be a need for cash in certain markets and verticals where those on lowest incomes shop most frequently,” says Simon. 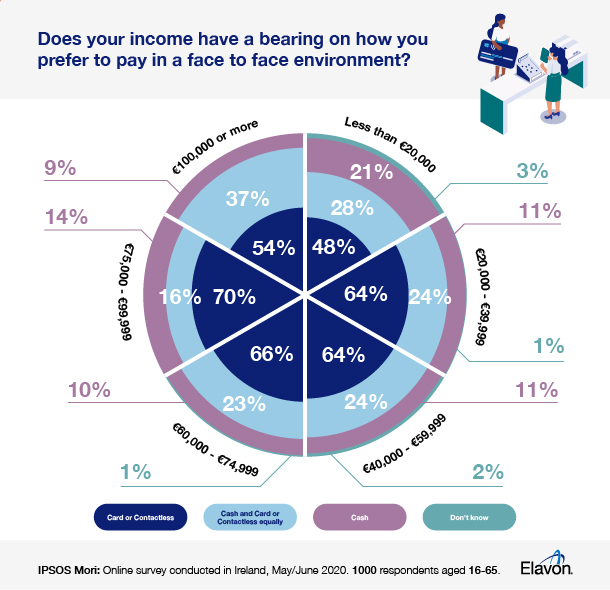 Does it matter where you live?

Across Ireland, the use of card and contactless payments was universally the preferred option.

It was the same (59%) for Connacht, Leinster and Munster, and only slightly higher (63%) for the three counties of Ulster – Cavan, Donegal and Monaghan – that are part of the Republic, taking into consideration the smaller number of respondents in this area. (For research related to Northern Ireland, see here.)

Those in Munster were the least willing to use cash (12%), with those in Leinster being keenest (16%).

“Across all demographics, the most widely preferred payment option, by some margin, is consistently card and contactless, according to our research.

“What does all this mean? Well, knowing the payment preferences of your target audience means you can be best prepared to offer and accept the methods your customers want to use. Doing so in a face-to-face environment can convert browsers into buyers, while online it can reduce cart abandonment. In both cases, it could even see an increase in the value of each basket or order, if customers are confident throughout the purchase process that they can pay with their preferred method.

“If your business doesn’t accept the full range of card or contactless payments, then what are you waiting for? Talk to us.”

The research was conducted on i:omnibus, Ipsos MORI’s online Omnibus.

·               The sample obtained is representative of the population with quotas on: age, gender, region and working status.

·               The data has been weighted to the known population profile by age, gender, region, working status and social grade to be nationally representative and reflect the adult population of Ireland.